MCALLEN, Texas (ValleyCentral) —One week before he retired, former McAllen Memorial High School head football coach and athletic coordinator Bill Littleton was reprimanded for sending inappropriate texts to a parent, according to documents obtained by Valleycentral.com through the Texas Public Information Act.

The documents, released this week after the Texas Attorney General’s Office ruled that the McAllen Independent School District could not withhold them, contain text messages sent by Littleton to two different women, one of whom filed a formal complaint against him on May 26th. The district issued Littleton a written reprimand the next day, and he retired on June 2nd.

A third woman, who is an employee of Nexstar Media, Inc., Valleycentral.com’s parent company, also received text messages from Littleton that she described as inappropriate.

Valleycentral.com does not name victims of sexual harassment. We have also redacted portions of a text message referencing the woman’s family, even though it was not redacted in the documents released by the district.

In the complaint, the woman said Littleton’s messages were sexual in nature. She also said she was scared to come forward because of his position, and because she was afraid of what might happen to her children, who were part of the Memorial High School athletics program.

“After much prayer, thought and for the safety of female coaches and children at Memorial High School, I made the decision to come forward,” the statement reads, “and turn in all of the text messages and answer all questions.”

The text conversations reviewed by Valleycentral.com span several weeks and show a pattern of behavior from Littleton, who admits to one of the women after she confronted him that he was “just flirting a little” and that it “went a little too far.”

It’s not clear how the district came into possession of the text messages sent to the woman who did not file the formal complaint, though Valleycentral.com can confirm the texts are from conversations with two different women.

In both exchanges, Littleton often texted innuendos to which the women don’t immediately reply. He then followed with a statement acknowledging their lack of reply and asked if they liked the previous text. 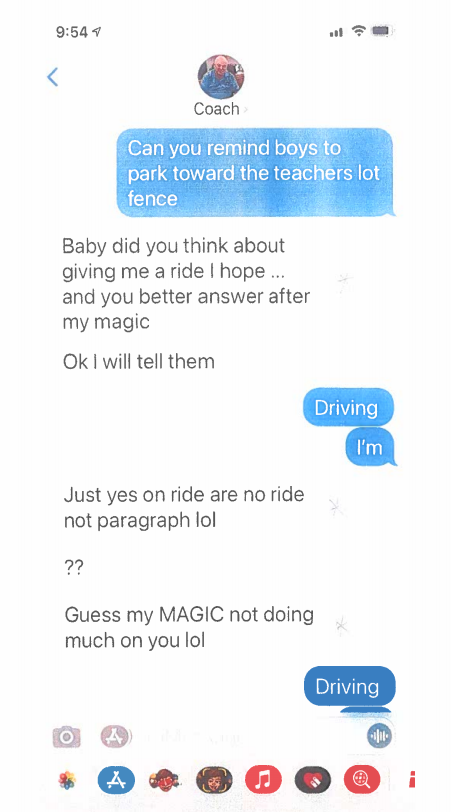 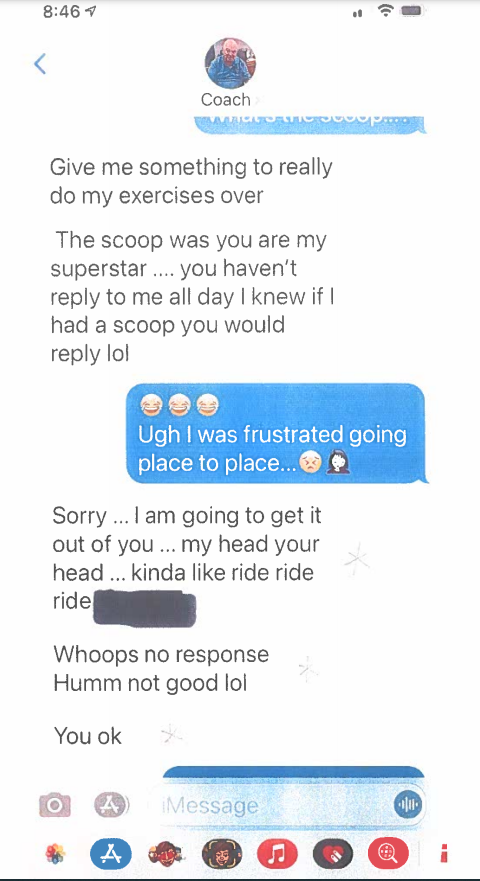 In one exchange, Littleton suggested to the woman that he coach her in a sport that “might be more like a type of wrestling.” When the woman didn’t reply to a follow-up text, he assumed she didn’t like it. 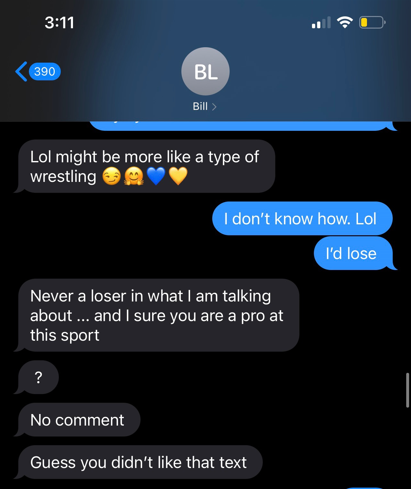 The woman attempted to redirect the conversation to music. The two had been discussing songs they liked.

Littleton suggested she listen to “Behind Closed Doors” by Charlie Rich. The woman remembered the song fondly because her dad played it, and suggested that the song shows Littleton and his wife are in love. Littleton responded that he wasn’t talking about his wife. 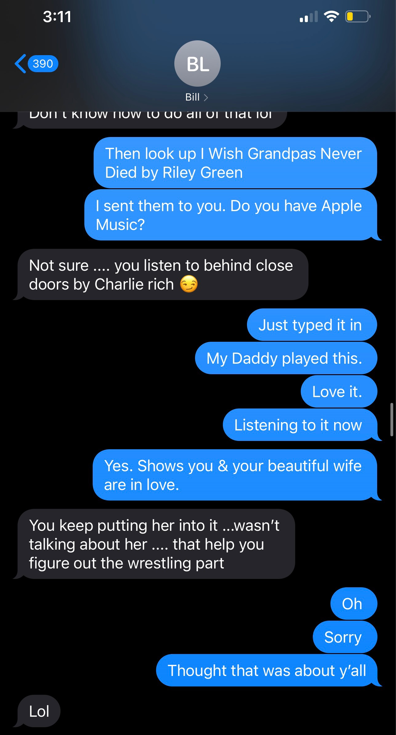 During the conversation about music, the woman mentioned she liked “Summertime Love” by Flatland Cavalry. Littleton asked twice if she was trying to tell him something, then mentioned “reading between the lines” in regard to the song title in three separate messages.

He also asked her if her husband got into her phone. When she said no, Littleton replied, “Good and you do delete right (sic).” The woman told him she did not delete texts.

Other exchanges weren’t as subtle. In one, Littleton suggested the woman liked to “ride a cowboy save a horse.” The woman wasn’t sure what he meant, so Littleton dropped the innuendo and answered, “Mean you like to be on top.” When the woman didn’t respond right away, Littleton again responded with an assumption that she didn’t like the message. 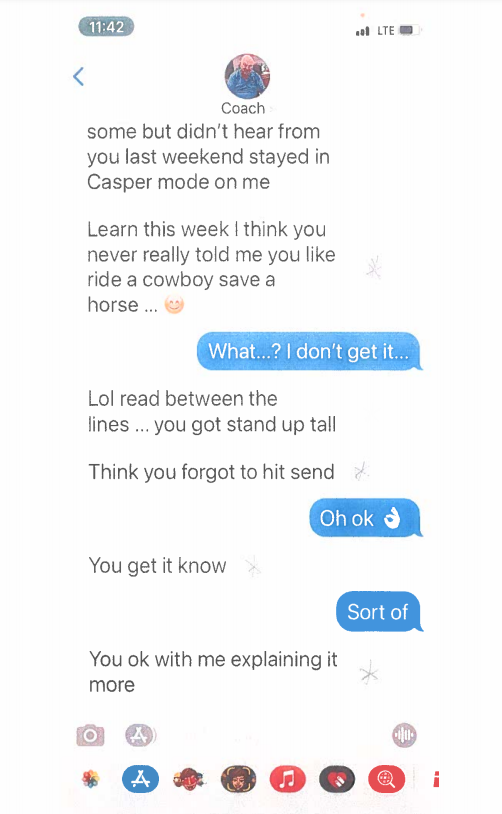 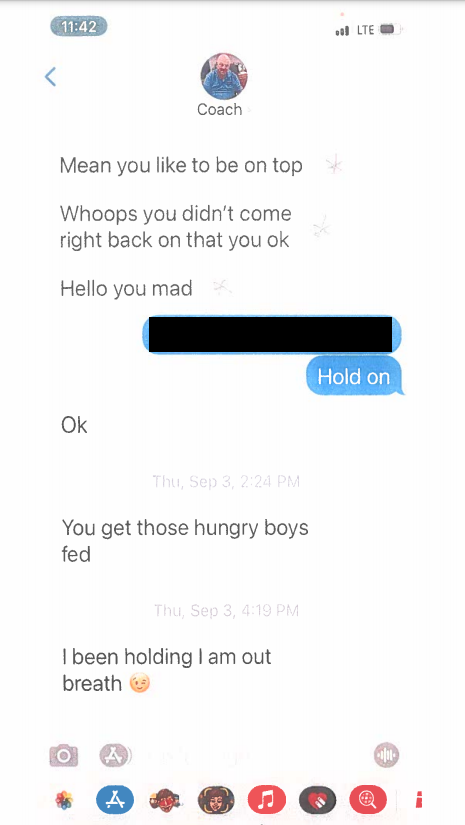 In a message prior to that exchange, Littleton told the woman, “I want you to spur me with your boots on lol.” It’s unclear from the screenshots provided by the district what prompted him to say that.

Text messages sent to the woman employed by Nexstar Media, Inc. didn’t escalate to the level of the two women included in documents from McAllen ISD. But the texts were late at night and seemingly unrelated to the working relationship between the two.

Littleton told her she was his favorite, and his texts often included wink and heart emojis. He also commented on a dress she was wearing and once asked if she could keep a secret.

The woman did not reply and ignored all texts from him that weren’t work-related after that.

In response to a request for comment, McAllen ISD issued the following statement:

“McAllen ISD prides itself in being a high-performing organization. Our district holds itself to very high standards. Personnel matters are confidential.”

The district also said it provides sexual harassment training annually and that it is required for all employees.

Littleton’s retirement ended a 45-year career in education, including 22 years as a coach. In 18 years at Memorial, he led the Mustangs to 10 district championships and reached the playoffs 14 times.

He was part of the 2020 RGV Sports Hall of Fame class. Because of COVID-19, the ceremony was postponed until June 19th of this year.

His retirement prompted a wave of praise and congratulations for one of the winningest coaches in RGV history, including from Memorial High School’s principal, who said the school “will be forever grateful.”

But for the woman who filed the complaint, Littleton’s legendary status is shattered.